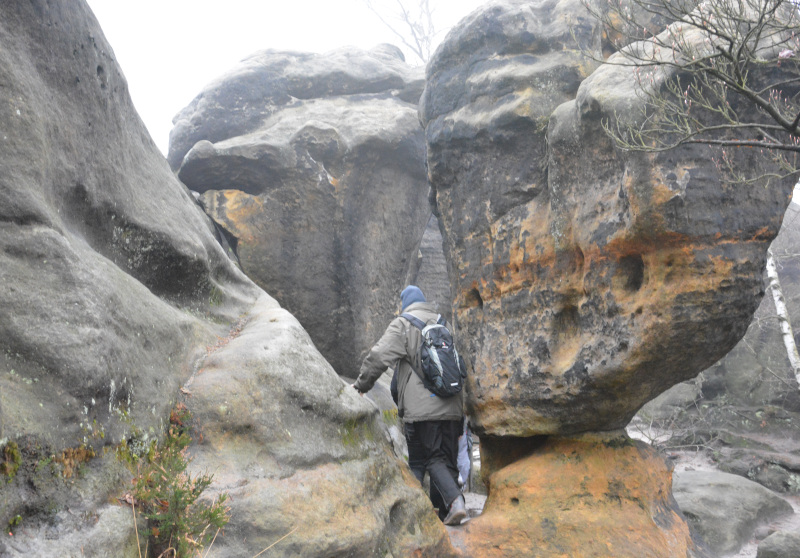 First published in German under travel stories in November 2019

With this story I take up the question of Simone, which she raised on her german outzeit-blog: „Camping in winter?“ Yes, it works. Especially with the „comfortable“ natural sites in the Elbe sandstone.

Among some of my friends, mostly former boy scouts, a tradition has developed for over 25 years. The Boofen weekend on 4th Advent. It has a lot to do with the fact that we like to escape the whole Christmas stress, which is unfortunately becoming more and more commercial, at least for a few days and prefer to approach the Christmas days, which are then dedicated to the family, in a more contemplative way.

Boofen is something typically Saxon. Elsewhere there is no Saxon Switzerland, and thus the conditions are missing (at least to a large extent). I think I have to explain this first, both geologically and germanistically – not to say saxistically what some people might get the wrong idea. Let us begin linguistically. In some regions there is pofen or poofen as a verb, which means to sleep, possibly with the connotation of to sleep in, sleep too much, lazy etc. In Saxon this means of course boofen. With a nice soft B and long ooooo, and after the f follows the short n, the e is almost inaudible. Basically the meaning is similar to the above. And now comes the geological influence on the language. Since the Elbe sandstone is similarly soft as the B in Boofen, over the millennia, caves and overhangs have been washed out of these rock – walls and needles in Saxon Switzerland. Some of them are only big enough for one or two people to cuddle underneath, others take in whole mountaineering choirs… or just us.

Not all of these overhangs are weatherproof, but many offer good protection in most weather conditions. They tempt you to spend the night outdoors, but under a thick rocky roof. And this is called „boofen“ in Saxon, the caves themselves are so-called „Boofen“. The bedrooms of the migratory birds, so to speak, in the open air, but still protected. A canopy bed with a sandstone sky. And the migratory bird is not mentioned here by mistake, this tradition has existed at least since the youth movement at the beginning of the 20th century, when Freischar, Wandervogel, the first boy scouts and other youth – bands moved out and spent the night in the open nature. In addition, there were the mountaineering clubs, which have also been on the move in Saxon Switzerland for a long time.

Since there is such a long tradition, the Boofen with the official German designation „Freiübernachtungsstellen“ (free overnight accommodation) were even included in the National Park Ordinance. Because Saxon Switzerland is to a large extent a national park, and in the national park it is actually not allowed to stay overnight just like that. But some of the boulders were officially recognized as storage sites with strict conditions of use (e.g. no making a fire!).

Now „no fire“ is pretty bad in winter…

But there are, especially on the left bank of the river Elbe, parts of Saxon Switzerland that are not located in the national park. Therefore we are rather on the way there.

Sometimes when I tell you about it, the first thing that almost always comes up is the questioning remark „I bet you have a super good sleeping bag there!“ My answer is – „No, why? Two bad ones do the same“ It’s not like I’m always outdoors in winter. I don’t really like the cold and the winter. That’s why I have several sleeping bags, which I use in spring and summer depending on the weather and my plans, but not a real winter sleeping bag.

I just take a normal down sleeping bag, with a ticking inside, which I always use anyway, and put it all into a not too thick synthetic sleeping bag. If it should be really crisp, a fleece blanket sewn together inside or an old army tent canvas, tied together to form a bivouac bag, but normally I don’t need that. And I usually sleep without many clothes. Except – a few sheep wool socks, which my mother knits herself, with real sheep wool flocks inside. Unfortunately, I get cold feet very easily…

Oh, yeah, the insulation mattress is important. At least as important as the sleeping bag, otherwise the ground cold creeps up and the night becomes very unpleasant. In winter I use a simple Ridge-Rest mat with closed-pored foam ribs. It should reach down to -30°, I have already tested it down to -15° and am very satisfied. I have heard some people swearing with the great „air mattresses“ at night, because they have become leaky due to thorns or stones and then „lost their posture a little“.

It’s always a great weekend. We meet on Friday afternoon – most of us go to work normally before – then we go out with the local train and have a walk through the darkness before us to the previously selected Boofe. It just gets dark early in winter, which is quite annoying in everyday life. With Boofen the situation becomes more attractive.

We have already experienced it that we arrived in Saxon Switzerland in a snow storm (many drivers spent this night on the A9 in their cars, snowed in, so we had it surely much better). There it was more quiet, only everything was deeply snowed in. We walked about 2 1/2 hours through the deep snow. The astonishing thing was, that left and right of the path there were lights everywhere – some other boofers were already occupied! By far we are not the only ones who are out on the 4th Advent. Mostly it is mountaineering groups or choirs who celebrate their Christmas. One time we already moved to a smaller Boofe, because the next day a bigger group of mountain friends joined us, another time we shared our Boofe.

In one year I was on the way to work just at the Baltic Sea and on Friday afternoon I drove by car to Dresden to meet the others. On the motorway I wondered why my windshield water always freezes right away, the heating was running on top level and it didn’t get really warm. Shortly before Dresden I changed the radio to mdr-culture, there were news and the weather forecast „…Dresden -14°C“ All clear! So I had to call first if the others left, because one of them once said ‚below -8° he doesn’t drive anymore‘. But I already heard at the background noises, they are sitting in the S-Bahn.

The fire was burning in the Boofe, it was only warming to some extent that night. The backs were still quite cold. Our talks were shorter than usual, because everybody wanted to cuddle into his sleeping bag. At the next morning a Sigg water bottle (made of aluminium) left outside had burst open lengthwise. Ice came out of the crack. But it had become warmer – only -9°! On Saturdays we always go on an extended hike. Of course, we usually head for a pub in the early afternoon and warm up with an enjoyable meal. The „Elbi“ is too small for us to start cooking ourselves – you can „walk“ to an inn anywhere. In the evening we have another round at the campfire. Some of us carry a few cartons of mulled wine with them. This has never been my case. Anyway, that weekend the mulled wine crawled like a jelly out of the cardboard into the pot!

When everyone is lying in their sleeping bags and snoring, the picture sometimes reminded me of whales that have gone astray and ended up on the beach – bodies wrapped in sleeping bags everywhere and a column of steam above them, like the blow of a whale.

I still prefer temperatures a little below zero degrees than above, because then it often gets wet and cold, the wind cools unpleasantly, and a few times we also had freezing rain showers during our hikes – that’s really ugly. The only thing that helps is to dance warmly around the fire. When the snowflakes are swirling and the forest and the rocks are a bit snowed in, everything looks much friendlier.

If you want to go out in winter – it’s doable. More exhausting than the cold I find the long darkness. With the Boofen this is no problem, because we sit around the campfire for a long time and talk. Some of the people I see only once a year, there is a lot of stuff… But I have also done winter tours on my own and squatted somewhere in the woods without a fire – that quickly puts me in a good mood. A good torch with a lot of stamina is necessary in any case… to be able to go pee or to find your own sleeping bag again. Otherwise, as I said, one or two sleeping bags, a usable sleeping mat (or two here if you only have simple mats) and, when it comes to clothing, good layers of onions. During the hikes the layers can be thinner, for camping you need something to pull on.

It is also important to have the right shoes, especially in wet and snowy conditions a good tread, which will keep you in shape and keep you moving. My opinion is that only proper leather hiking boots are good in the long run. Warm them up well before the tour and rub them with Sno-Seal to make them really tight and supple. When the leather is nicely warmed up, you can watch Snow-Seal being put on.

Oh yes, and take the sleeping bag(s) out of the transport cover at the camp site as soon as you arrive and shake them well – cm by cm, that’s good for a lot. Then the fibres/down can relax and absorb air again. A compressed sleeping bag does not keep warm very well. In my opinion the difference is clearly noticeable, especially on cold winter nights.

As far as the catering is concerned, I have simplified it quite a bit in the last few years. For such a weekend I prepare breakfast (6 rolls) and dinner (a neat package of already greased „Bemmen“ [sax: bread]) at home. This eliminates the need to carry around various spreads and cheese packs or butter, which is only as hard as bone in the campground anyway. The food is therefore „naturally cooled“ in winter. The disadvantage, ‚social food exchange‚ – „May I taste your great jam? ..Would anyone else like some more of this wonderfully ripe camembert?“ – is not or only partially possible. I encounter this with a large bag full of homemade Christmas cookies, which already start to make their first rounds when they arrive in the S-Bahn (local train).

For all the luggage I take my big 55l rucksack, everything fits in it including the rolled up iso-mat. It looks pretty huge for a weekend tour, but it is still relatively light, since sleeping bags and mattresses don’t really carry much weight. And I have my hands free, nothing is dangling around, it is going well.

For those who like to go out in winter, but without sleeping outside – there are good accommodations in both Saxon and Bohemian Switzerland (the part of the Elbe Sandstone Mountains on the Czech side). From there, day hikes are possible… well, I recently described this as a tip for „Between the years…„. 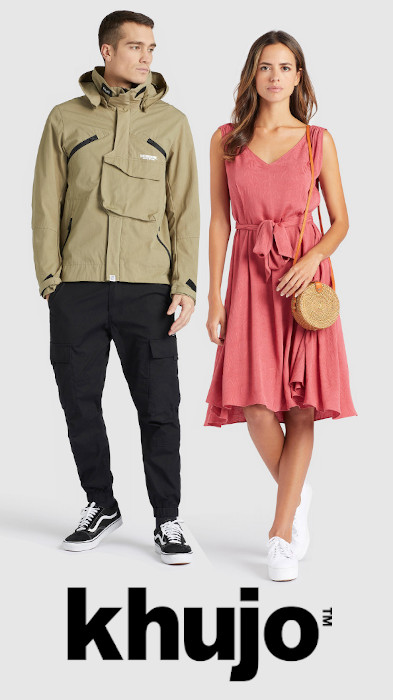