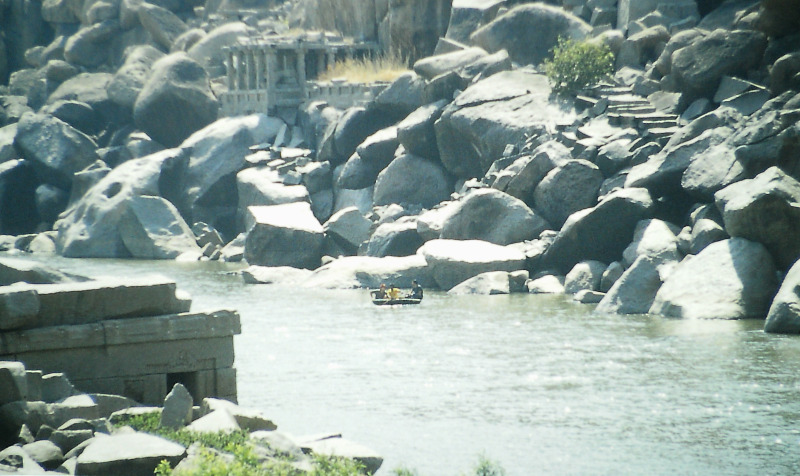 From Palolem in Goa (India) I decided to go to Hampi in Karnataka for a few days. This is a famous place in Karnataka with temple ruins of an ancient empire, today world cultural heritage. So I rode my bike to Chaudi station, then took the train to Margao transfer station and then an „express“ to Hospet, the station near Hampi. Meanwhile I left the bike in Chaudi in front of the station.

Apart from me, there were mainly Indians sitting in the compartment – who is surprised – and a German girl, who was also a traveller. I found it interesting that she travelled with light luggage, but had her own cooking utensils with her and always cooked her own meals. This was a bit unusual for me – until now I always assumed that it is much easier and extremely cheap to go out for dinner somewhere in India than to start shopping and cooking by myself.

I was often in the smallest pubs where the locals go and where there is usually only one dish on offer that day. The costs for it were mostly only 50, 60 Eurocents. But I also admired it a little bit, because it is a sign of great independence and sovereignty, while I basically always had to rely on the offers of the local cooks. Well, there are lots of them, and they want to live…

Especially the first part of the track is very interesting, as it leads right at the eastern edge of Goa over the Vasco-Castle-Rock serpentines curve by curve into the western Ghats. On an old stone viaduct, the railway crosses the 600m high Dudhsagar Waterfalls, which I had visited by jeep only a few days before.

In India there are always interesting things to observe and this is no different in trains. All the time flying merchants come through the train and praise „Pani-Water“, „Coffee“, „Tschai“ and various food. Other travellers sometimes have the strangest luggage. In our compartment there were still two fishermen sitting, and they started to tie nets shortly after departure. They unpacked their spools of thread and started to make the net, stretched the fabric with their toes and off they went – for hours, the whole trip. They made the most of the long journey.

Arriving at the train station Hospet in Karnataka, I had to walk a little bit through the village to get to the bus to Hampi. Beside locals there were some other travellers – for example another girl who had juggling stuff with her. It was the only time I saw someone with juggling clubs on this trip in India.

The bus only goes to one place, the bus station in front of the „Hampi Bazaar“ and discharges the travellers there. Then each one of them goes on his way, looking for accommodation. Already here the surroundings were rocky and some columns and hewn stone slabs lay around.

I slowly strolled along the main street Hampi Bazaar, past some temples, houses of the locals, market stalls, chickens chasing pecking across the square… Then I came to the river bank of the Tungabhadra River. I had read that on the other side of the river in Virupapuragadda there are more guesthouses and you can find simple and nice accommodations there. For that I had to cross the Tungabhadra. There was a jetty from which a motorboat crosses the river as a ferry. In front of it there was a big sign with the official information that the maximum ferry price to be paid was so many Rupees. On the boat they took of course the double, they had a monopoly for the river crossing.

On the other side of the river, the road ran between houses of the locals and guesthouses. They offered massages, Reiki school, cooking classes, there were a few restaurants and bars. A sadhu offered me fortune-telling services, a bit further on the gong rattled from a meditation centre.

Almost at the end of the settlement road I found a farm where a family offered overnight accommodation in small mud huts. That was very cheap and comfortable. The huts were without electricity and had only tiny windows. I was given a candle and matches to light them. A mosquito net hung over the bed. But that was also necessary. Behind the courtyard, the terrain sloped down in terraces to a side arm of the river, and mosquitoes romped over the swampy embankments.

On the farm there was a German girl, Ines, who was taking a Reiki course, an elderly German traveller, who provided music with his small boxes and players, and John, a young Briton, who had bought an Enfield and wanted to travel through India with it, maybe even back to Europe and England afterwards. He was more or less drunk all the time and otherwise he tinkered with the bike, everyone was in doubt whether he would ever get away.

Besides, people came by all the time. The family earned a living by running a restaurant and bar, i.e. they offered drinks and various food for reasonable prices on the yard, so that during the day other Travellers and Indians came in and brought life into the inn. Somehow the yard was a local communication center and in the less warm hours of the day a constant coming and going. However, further back, on the slopes towards the river arm, there was a „Hammock-Area“ where we could chill out together, enjoy the view of the river and the green landscape behind it and entertain each other with Traveller stories. Ines with the Reiki course took the opportunity to practice with us, the music freak provided chillout-mugge, the host offered drinks from time to time… it was a small oasis.

Of course I was otherwise on my own several times during the day to explore the surroundings. Hampi, Vijayanagar – the „City of victory“, is famous for its temple and palace ruins, which stretch over a wide field of rock bands between banana plants and under coconut palms. Large boulders are scattered everywhere, as if giants had played in the giant sandbox and thrown the stones around by hand. And also the temple and building ruins consist of the hewn rocks and are converted into columns, roof slabs and steps. The complex of Vijayanagar was one of the most important Hindu capitals in the 14th to 16th century. Reports from travellers tell of unimaginable wealth that was displayed at markets – silk and jewellery in abundance, glittering festivals and lavish banquets. Unfortunately, the city Vijayanagar was then besieged and destroyed, so that hardly a stone was left standing, and today the picture is dominated by fields of ruins. However, even these are so impressive that a picture of the rich city life iin Vijayanagar can blossom in the imagination.

One day I also set off with Ines, we hiked to the Hanuman temple, which stands on a rocky outcrop and to which you have to climb steep stairs. Pilgrims dressed in white came towards us in groups. Already halfway up the stairs the monkeys welcomed us and climbed on us begging. Hanuman is the monkey god. In the holy of holies young men in white robes distributed donations like rice and pastries and renewed the flower bouquets. Probably in the end it was the monkeys who benefited most. In the afternoon we walked through the rice fields to the river and settled on a rocky plateau sloping down into the river. Then we went swimming, I swam around in the fast-flowing water and was happy about this beautiful place between rocks, under palm trees and the hot Indian sun.

South of this temple there was another possibility to cross the Tungabhadra river – with the Patty-Boat. These are round oversized baskets, which can hold about 8 – 10 people and which were originally probably covered with animal skins or sealed canvas from below. Today there is a GFK synthetic resin coating on them, which seals the patties. So you can paddle across the river for little money. The mostly young ferrymen are not only friendly boatmen, but obviously have fun doing it. One evening on the way back I only put my backpack with my camera into the boat – in view of the persistent heat of the day -, went into the river myself and swam next to the patty boat. That was a fun for all who were still there at the ferry station! On the other bank I even got applause. … and of course my backpack back. Of course I gave a tip for it.

So the days passed in Hampi. Actually I wanted to stay there only 2 days – in the end I was there for a whole week.

The way back was the same as the trip there. First I took the bus to Hospet. No idea, once a day there is a through train to Goa. It will work out fine. In India everything always works out. So I walked the main street from the bus station to the train station – here a chat with a trader, there again astonishment about a street craftsman… sometime in the morning I arrived at the train station at half past ten. There they told me that the train to Goa leaves every day at half past nine. Yes, but except today. The train’s late and will be here in a few minutes. So once again, everything’s fine. This is India.

At Chaudi station in Goa I come out of the station concourse. In front of it stands my black Indian wannabe – mountain bike as I parked it a week before, only thickly dusted. My suitcase lock and the small chain around it is rather symbolic, I can bend the chain links with my fingers. A few days later I sell the bike in Palolem to a bike rental company, who pays me the equivalent of 20€ for it after a thorough inspection (he even discovers a damage on the front tire, which I had not seen before). A good deal, I even made two Euros plus with it!

By train I continue my journey south, always along the Malabar coast.