The total revolution rotates with the sun 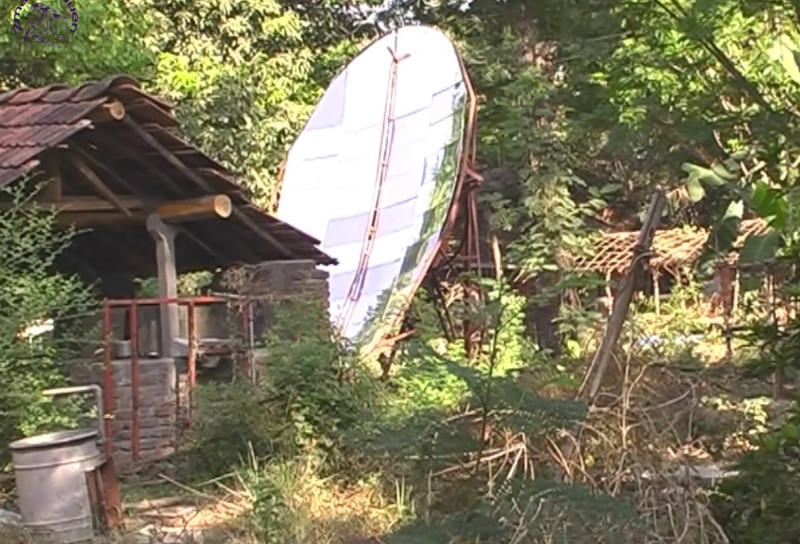 Varanasi is for me the city where „India is most Indian“. Thousands of pilgrims go daily to the Ganges. The air is filled with the smells of cookshops, flower stalls and the smoke of the burning ghats. Boats crowd the river and try to catch tourists for the boat trip. Sitar and tabla students practice in the small music schools, which we would rather think of as car garages. Rickshaw drivers try to make their way through the crowds with bells and loud shouts. Snake-„conjurers“ let their cobras out of their baskets and play for a few rupees for a snake dance. Real and fake sadhus pose for photos (and rupees as well). …

In the Yogi Lodge we met Nora at breakfast. Okay, Nora, and two more German girls, Inga and Sina. As we learned, they made a round trip – India in 4 weeks. That is quite sporty. We got into conversation and were told that they want to go to Sarnath – just like us. A good opportunity to be really „Indian“ on the road, i.e. to share a rickshaw with five people, which actually only has 2 seats on a bench at the back and the (admittedly, relatively wide) seat for the driver at the front.

Sarnath is about 14 km outside of Varanasi in the country. Exactly the place where Buddha gave his first sermon after his enlightenment in the gazelle grove and thus started the „Dharmachakra“, the wheel of teaching. And that is why there are a number of temples of all Buddhist religions in Sarnath.

So we set off together. At the rickshaw stand, I was amazed for the first time – Nora took over the negotiations in Hindi! We wouldn’t have expected this, especially not from a 20 year old girl who was clearly German. But she didn’t do a bad job, and shortly afterwards we were on our way. So I was stuck with an A*** cheek on the front seat on the left of the driver, on the right of the driver Nora, while Peter was squeezed on the narrow bench by the other two girls. What he obviously liked 🙂 And then it started, with about 30 kilometers per hour in a noisy rickshaw to Sarnath!

During a walk in the Sarnath gazelle grove I learned a little more about the three of them and above all the secret why Nora spoke Hindi was revealed. Nora and Inga were on a voluntary service – she was in India, Inga in Sri Lanka, which is almost around the corner (just like Finland and Italy;-) ..) The third one, Sina, was Inga’s sister and came especially for the India tour. And the first big challenge for Nora was to learn Hindi in order to really have a say in the community.

Little by little I also learned about the service – in a kind of ashram called „Sampoorna Kranti Vidyalaya“, which translated roughly means „Institute for total revolution“. There are very different people living there, from physicists and craftsmen to young women who were married when they were minors and have now broken out of forced marriages. Joint projects and shared tasks. Gardening every day to become more and more self-sufficient…

Since I was travelling with Peter as a colleague from the media branch and we had planned to do some filming and make this as a „report“, I got a lot of attention. Maybe this is our topic! A young girl who is doing volunteer work in India for one year after graduation.

Anyway, we decided to keep in touch and maybe drive to Sampoorna Kranti Vidyalaya towards the end of our trip.

On the rest of the tour I had email contact a few times to hear a little bit more about what it is all about.

The ashram Sampoorna Kranti Vidyalaya was founded by Narajan Desai, the son of Gandhi’s private secretary. He still lived there at the age of 80 and brought in the spirit of the Gandhi Ashrams. He had grown so big in the community with Gandhi’s „disciples“.

In addition, a lot of people who were eager to experiment had come to the ashram. They tried to promote renewable energies and to ensure the basic supply with farm work. Everybody had to contribute. Sampoorna Kranti Vidyalaya is part of the Indian peace movement in the tradition of Gandhi.

How the community develops will be discussed and debated in the evening mela. Everyone takes responsibility for the common tasks. Otherwise the spiritual freedom was far greater than in traditional Indian communities – marriage was not considered indissoluble, religion is the business of each individual, partnerships developed…

When we reached the small village near Surat, it was just before Holi. That was a pity because many inhabitants left the ashram for a few days to visit relatives and friends. Here in Europe Holi has been commercially marketed as a colour and music party since a few years. In India it is mainly a Hindu holiday to welcome the spring full moon. Sure, even there some young men go crazy. Those not involved must expect to be hit by a colour bomb. The Indians were so considerate towards me as a „white nose“ – I always got only a little bit of paint, just a gentle fingerstroke on my forehead or face, don’t stain my already sweaty traveler clothes! Many streets and house fronts look blue and red in the evening, not to mention the people. But it’s not just an exuberant party, it has a religious background. Basically more like Easter in Hindi.

Unfortunately only some of the inhabitants of Sampoorna Kranti Vidyalaya were still present, so our impression of Ashram life was perhaps not quite perfect. Anyway, a rickshaw driver drove us directly there and we were awarded the guesthouse. Our plan was to stay for 2 days, take some nice video shots and then leave – after all we were there for almost a week. Because, it was just pleasant, a friendly, hospitable atmosphere, we felt welcome, everyone introduced us to what they were doing there and how life goes. And it became more and more interesting every day to learn how the Ashram came into being and with what motivation the people there live together. Our film also tells about that. But if I had known more about it before, Sampoorna Kranti Vidyalaya itself would have been the subject and not the German volunteer who immersed herself there for a year.

The most exciting and impressive for me was the conversation with Narajan Desai, who sat on the terrace with his mobile spinning wheel, twirling the wool thread with meditative movements and told us in passing: How he grew up with Gandhi, went off as a youth and founded the first ashram himself, in order to give the people in the countryside an education and handicraft self-sufficiency skills. How he then helped to build up the nonviolent Indian Peace Brigades to bring more peace and justice to the country and later created the Sampoorna Kranti Vidyalaya ashram we were sitting in. These were not just stories from an old man’s life, there was a palpable power emanating from him that could bring about change.

I really liked the big sun oven. Reflecting metal plates were fixed on a frame in the form of a concave mirror and controlled by a clockwork. Thus the sun shone all day long on one point – the solar cooker of the communal kitchen. And there the vegetables were sizzling in the pan without any other energy source!

Really impressive – if such a stove were to be installed as anywhere in India and in the sunbelt of our earth as possible, many trees could remain standing and store CO2. Sure, it would cost a little steel and chrome, but the construction would last for many years. Afterwards I was basically convinced that projects like desertec could solve a large part of our energy problems on earth. And a chance for weakly developed regions. That can be done in a completely decentralized way, just build up everywhere. Well, that would be a bit of a total revolution!

We had already seen building with bamboo everywhere in India. Bamboo is even used as scaffolding pole, on skyscrapers up to who knows how high! But I first became really aware of what an interesting resource it is at the Sampoorna Kranti Vidyalaya Ashram. Because there it was explained to me that bamboo grows back within a very short time. And the tubes are stable like steel. There are also reserves for development. Bamboo as building material and steel substitute material. A sun oven with bamboo – frame 🙂

Shortly after Holi and after a few beautiful days in a creative community we left the Total Revolution ashram and drove to the 16 million people of Mumbai.

At home it took a few more weeks to sift through all the material and then knit a little film from the footage of Sampoorna Kranti Vidyalaya. But at some point this was also done, we went around with the slide packages and our Multime-DIA-show and showed our short film „Revolution with the Hoe“ as a „bonus“. Since Narajan Desai has died in the meantime, we put the film about a vounteering in Sampoorna Kranti Vidyalaya on the net as a small „memorial“.